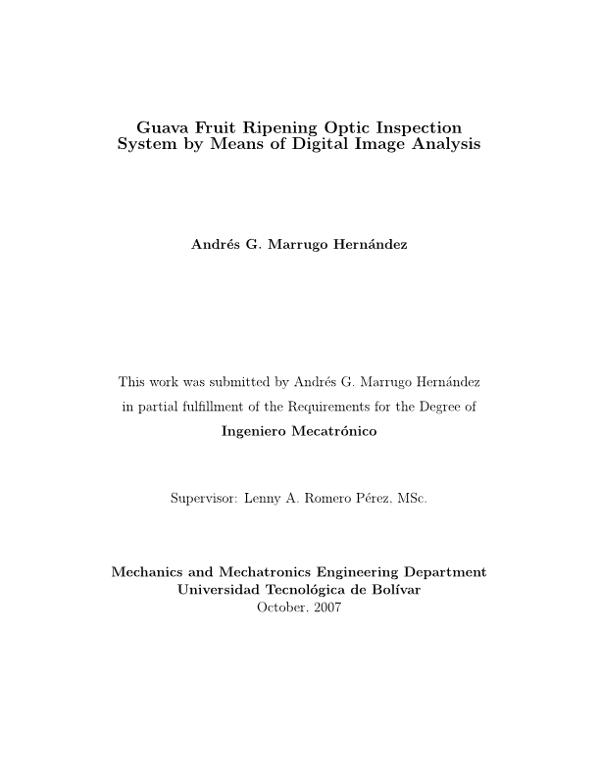 The agriculture industry is profoundly affected by subjectivity in quality inspection of fruits and vegetables. Quality in fruits is typically determined on a sample of the total population by destructive means and inference is performed on the rest of the population. Due to these factors non-destructive testing of fruits and vegetables has come forth and becoming and industry standard. Given that Guava (Psidium guajava) is a tropical fruit of major commercial impact in the country and in the region [8, 9], that is practically cultivated in every tropical and subtropical region of the world [10] the present work estimates its suitability for non-destructive testing. Nondestructive information from the fruit was acquired by means of digital image analysis and corroborated with traditional physical-chemical methods involving the measurement of total soluble solids (TSS) and titratable acidity (TA). Predominant color content (PCC) was determined, as well as its evolution, for identifying its relationship with TSS and TA. While TSS and TA behavior was as reported in literature and PCC behavior was as expected, no reliable relation was found probably due to the fruits respiration patterns. A similarity scheme was undertaken using color coherence vectors (CCV), an image color content retrieval algorithm, which assumes that two similar guava fruit images represent similar internal properties. This method shows recognizable correlation within the studied samples.