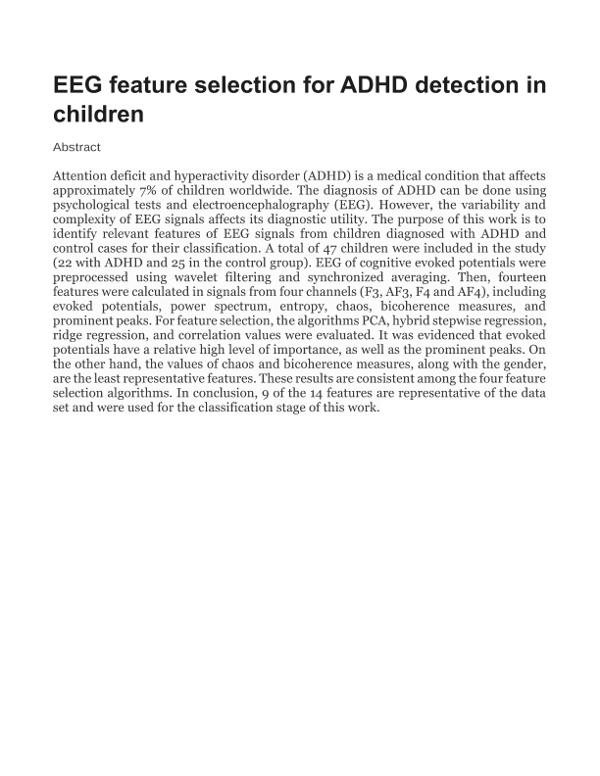 Abstract (62.72Kb)
Author
Mercado-Aguirre, Isabela M.
Gutierrez-Ruiz, Karol P.
Contreras-Ortiz, Sonia H.
University
Universidad Tecnológica de Bolívar
Metadata Show full item record
Abstract
Attention deficit and hyperactivity disorder (ADHD) is a medical condition that affects approximately 7% of children worldwide. The diagnosis of ADHD can be done using psychological tests and electroencephalography (EEG). However, the variability and complexity of EEG signals affects its diagnostic utility. The purpose of this work is to identify relevant features of EEG signals from children diagnosed with ADHD and control cases for their classification. A total of 47 children were included in the study (22 with ADHD and 25 in the control group). EEG of cognitive evoked potentials were preprocessed using wavelet filtering and synchronized averaging. Then, fourteen features were calculated in signals from four channels (F3, AF3, F4 and AF4), including evoked potentials, power spectrum, entropy, chaos, bicoherence measures, and prominent peaks. For feature selection, the algorithms PCA, hybrid stepwise regression, ridge regression, and correlation values were evaluated. It was evidenced that evoked potentials have a relative high level of importance, as well as the prominent peaks. On the other hand, the values of chaos and bicoherence measures, along with the gender, are the least representative features. These results are consistent among the four feature selection algorithms. In conclusion, 9 of the 14 features are representative of the data set and were used for the classification stage of this work.