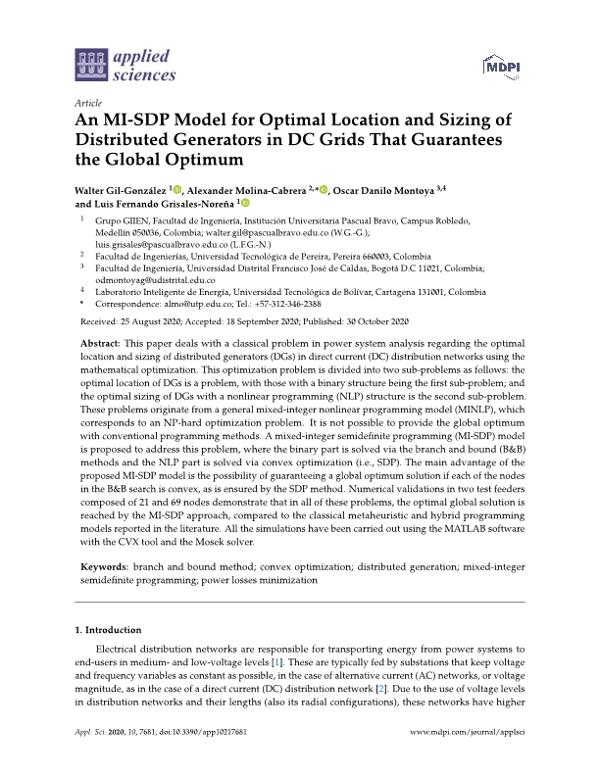 Artículo principal (302.5Kb)
Author
Gil-González, Walter
Molina-Cabrera, Alexander
Montoya, Oscar Danilo
Grisales-Noreña, Luis Fernando
University
Universidad Tecnológica de Bolívar
Metadata Show full item record
Abstract
This paper deals with a classical problem in power system analysis regarding the optimal location and sizing of distributed generators (DGs) in direct current (DC) distribution networks using the mathematical optimization. This optimization problem is divided into two sub-problems as follows: the optimal location of DGs is a problem, with those with a binary structure being the first sub-problem; and the optimal sizing of DGs with a nonlinear programming (NLP) structure is the second sub-problem. These problems originate from a general mixed-integer nonlinear programming model (MINLP), which corresponds to an NP-hard optimization problem. It is not possible to provide the global optimum with conventional programming methods. A mixed-integer semidefinite programming (MI-SDP) model is proposed to address this problem, where the binary part is solved via the branch and bound (B&B) methods and the NLP part is solved via convex optimization (i.e., SDP). The main advantage of the proposed MI-SDP model is the possibility of guaranteeing a global optimum solution if each of the nodes in the B&B search is convex, as is ensured by the SDP method. Numerical validations in two test feeders composed of 21 and 69 nodes demonstrate that in all of these problems, the optimal global solution is reached by the MI-SDP approach, compared to the classical metaheuristic and hybrid programming models reported in the literature. All the simulations have been carried out using the MATLAB software with the CVX tool and the Mosek solver.