A broad diversity survey of Rhizoctonia species from the Brazilian Amazon reveals the prevalence of R. solani AG-1 IA on signal grass and the new record of AG-1 IF on cowpea and soybeans 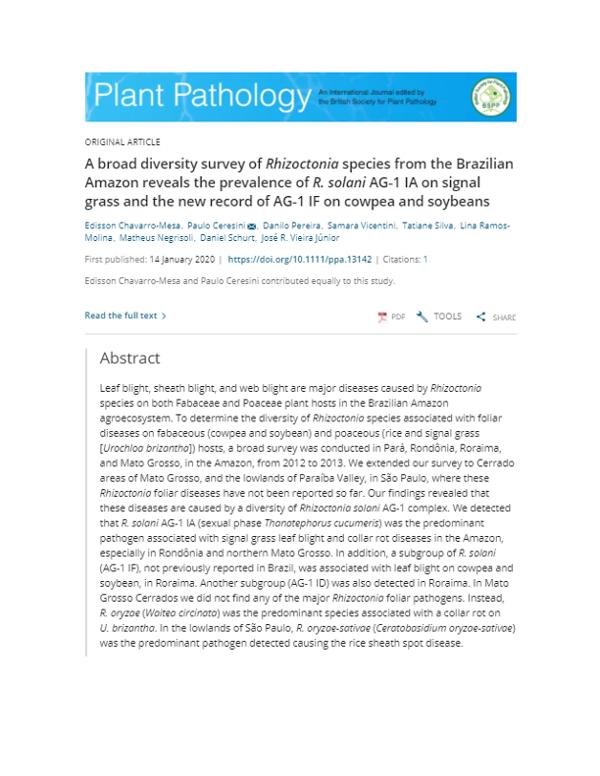 Leaf blight, sheath blight, and web blight are major diseases caused by Rhizoctonia species on both Fabaceae and Poaceae plant hosts in the Brazilian Amazon agroecosystem. To determine the diversity of Rhizoctonia species associated with foliar diseases on fabaceous (cowpea and soybean) and poaceous (rice and signal grass [Urochloa brizantha]) hosts, a broad survey was conducted in Pará, Rondônia, Roraima, and Mato Grosso, in the Amazon, from 2012 to 2013. We extended our survey to Cerrado areas of Mato Grosso, and the lowlands of Paraíba Valley, in São Paulo, where these Rhizoctonia foliar diseases have not been reported so far. Our findings revealed that these diseases are caused by a diversity of Rhizoctonia solani AG‐1 complex. We detected that R. solani AG‐1 IA (sexual phase Thanatephorus cucumeris) was the predominant pathogen associated with signal grass leaf blight and collar rot diseases in the Amazon, especially in Rondônia and northern Mato Grosso. In addition, a subgroup of R. solani (AG‐1 IF), not previously reported in Brazil, was associated with leaf blight on cowpea and soybean, in Roraima. Another subgroup (AG‐1 ID) was also detected in Roraima. In Mato Grosso Cerrados we did not find any of the major Rhizoctonia foliar pathogens. Instead, R. oryzae (Waitea circinata) was the predominant species associated with a collar rot on U. brizantha. In the lowlands of São Paulo, R. oryzae‐sativae (Ceratobasidium oryzae‐sativae) was the predominant pathogen detected causing the rice sheath spot disease.