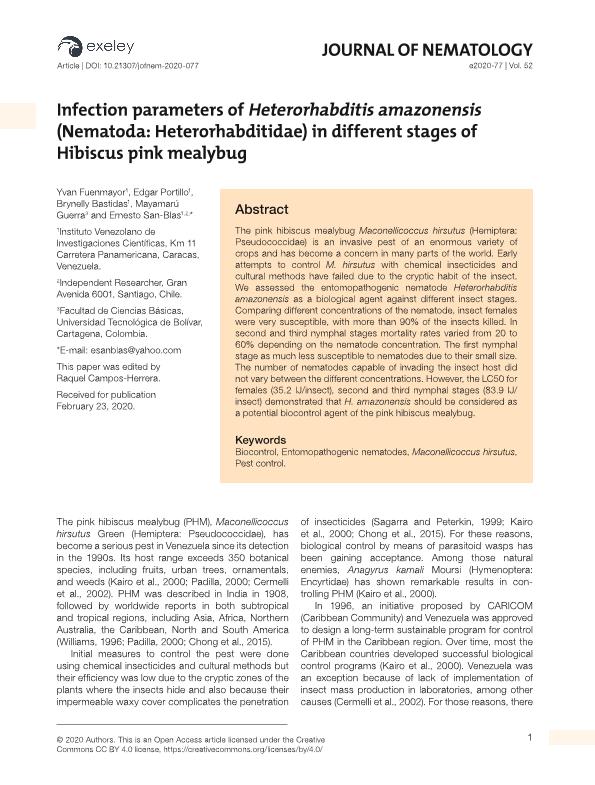 Artículo principal (360.3Kb)
Author
Fuenmayor, Yvan
Portillo, Edgar
Bastidas, Brynelly
Guerra, Mayamarú
San-Blas, Ernesto
University
Universidad Tecnológica de Bolívar
City
Colombia
Metadata Show full item record
Abstract
The pink hibiscus mealybug Maconellicoccus hirsutus (Hemiptera: Pseudococcidae) is an invasive pest of an enormous variety of crops and has become a concern in many parts of the world. Early attempts to control M. hirsutus with chemical insecticides and cultural methods have failed due to the cryptic habit of the insect. We assessed the entomopathogenic nematode Heterorhabditis amazonensis as a biological agent against different insect stages. Comparing different concentrations of the nematode, insect females were very susceptible, with more than 90% of the insects killed. In second and third nymphal stages mortality rates varied from 20 to 60% depending on the nematode concentration. The first nymphal stage as much less susceptible to nematodes due to their small size. The number of nematodes capable of invading the insect host did not vary between the different concentrations. However, the LC50 for females (35.2 IJ/insect), second and third nymphal stages (83.9 IJ/insect) demonstrated that H. amazonensis should be considered as a potential biocontrol agent of the pink hibiscus mealybug.