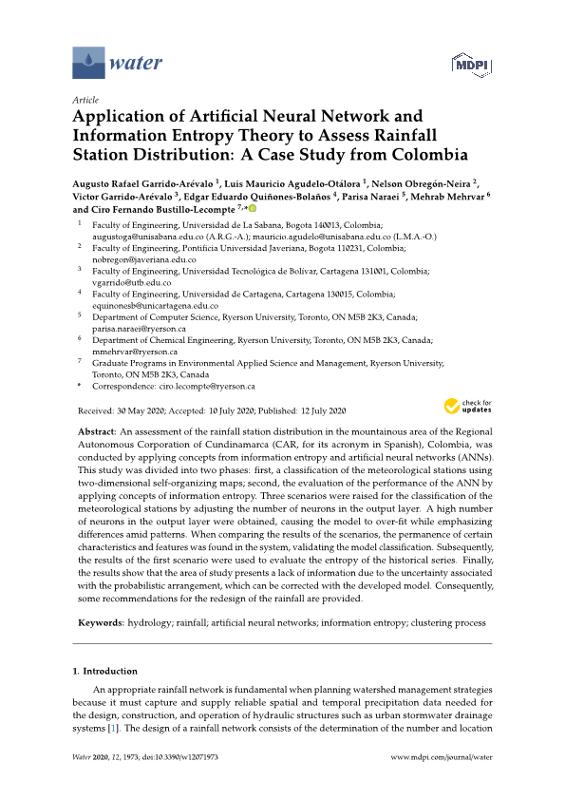 5.pdf (3.928Mb)
Author
Garrido-Arévalo, Augusto Rafael
Agudelo-Otálora, Luis Mauricio
Obregón-Neira, Nelson
Garrido-Arévalo, Victor
Quiñones-Bolaños, Edgar Eduardo
Naraei, Parisa
Mehrvar, Mehrab
Bustillo-Lecompte, Ciro Fernando
University
Universidad Tecnológica de Bolívar
City
Cartagena de Indias
Metadata Show full item record
Abstract
An assessment of the rainfall station distribution in the mountainous area of the Regional Autonomous Corporation of Cundinamarca (CAR, for its acronym in Spanish), Colombia, was conducted by applying concepts from information entropy and artificial neural networks (ANNs). This study was divided into two phases: first, a classification of the meteorological stations using two-dimensional self-organizing maps; second, the evaluation of the performance of the ANN by applying concepts of information entropy. Three scenarios were raised for the classification of the meteorological stations by adjusting the number of neurons in the output layer. A high number of neurons in the output layer were obtained, causing the model to over-fit while emphasizing differences amid patterns. When comparing the results of the scenarios, the permanence of certain characteristics and features was found in the system, validating the model classification. Subsequently, the results of the first scenario were used to evaluate the entropy of the historical series. Finally, the results show that the area of study presents a lack of information due to the uncertainty associated with the probabilistic arrangement, which can be corrected with the developed model. Consequently, some recommendations for the redesign of the rainfall are provided