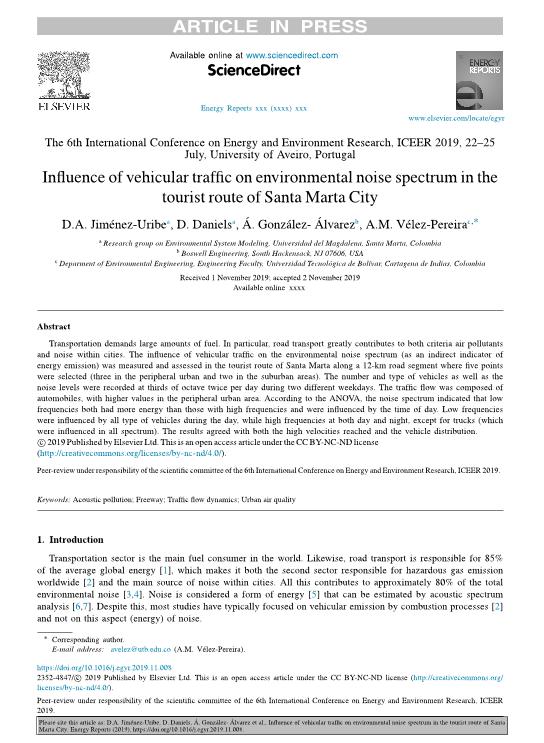 httpsdoiorg101016jegyr201911008.pdf (1.161Mb)
Author
Jiménez-Uribe D.A.
Daniels D.
González-Álvarez Á.
Vélez-Pereira A.M.
University
Universidad Tecnológica de Bolívar
Metadata Show full item record
Abstract
Transportation demands large amounts of fuel. In particular, road transport greatly contributes to both criteria air pollutants and noise within cities. The influence of vehicular traffic on the environmental noise spectrum (as an indirect indicator of energy emission) was measured and assessed in the tourist route of Santa Marta along a 12-km road segment where five points were selected (three in the peripheral urban and two in the suburban areas). The number and type of vehicles as well as the noise levels were recorded at thirds of octave twice per day during two different weekdays. The traffic flow was composed of automobiles, with higher values in the peripheral urban area. According to the ANOVA, the noise spectrum indicated that low frequencies both had more energy than those with high frequencies and were influenced by the time of day. Low frequencies were influenced by all type of vehicles during the day, while high frequencies at both day and night, except for trucks (which were influenced in all spectrum). The results agreed with both the high velocities reached and the vehicle distribution. © 2019