Analysis of the behavior of daily maximum rainfall within the department of Atlántico, Colombia 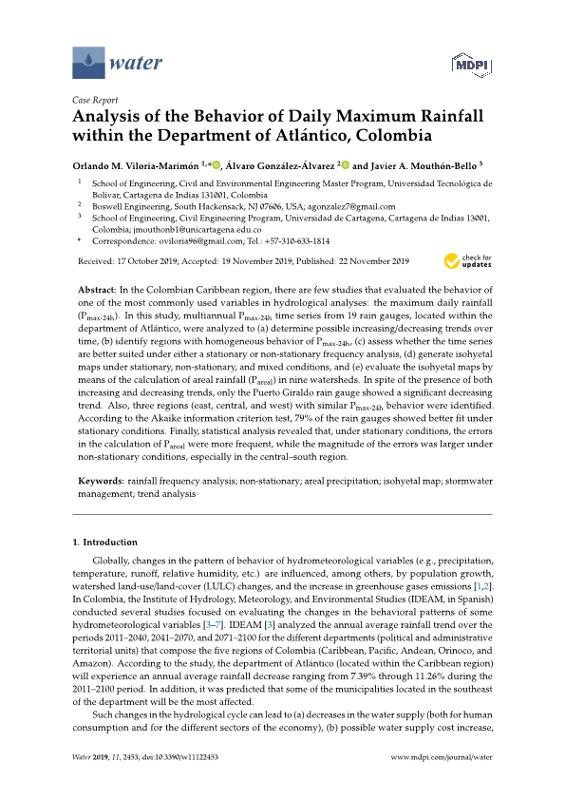 doi103390w11122453.pdf (6.095Mb)
Author
Viloria-Marimón O.M.
González-Álvarez A.
Mouthón-Bello J.A.
University
Universidad Tecnológica de Bolívar
Metadata Show full item record
Abstract
In the Colombian Caribbean region, there are few studies that evaluated the behavior of one of the most commonly used variables in hydrological analyses: the maximum daily rainfall (Pmax-24h). In this study, multiannual Pmax-24h time series from 19 rain gauges, located within the department of Atlántico, were analyzed to (a) determine possible increasing/decreasing trends over time, (b) identify regions with homogeneous behavior of Pmax-24h, (c) assess whether the time series are better suited under either a stationary or non-stationary frequency analysis, (d) generate isohyetal maps under stationary, non-stationary, and mixed conditions, and (e) evaluate the isohyetal maps by means of the calculation of areal rainfall (Pareal) in nine watersheds. In spite of the presence of both increasing and decreasing trends, only the Puerto Giraldo rain gauge showed a significant decreasing trend. Also, three regions (east, central, and west) with similar Pmax-24h behavior were identified. According to the Akaike information criterion test, 79% of the rain gauges showed better fit under stationary conditions. Finally, statistical analysis revealed that, under stationary conditions, the errors in the calculation of Pareal were more frequent, while the magnitude of the errors was larger under non-stationary conditions, especially in the central-south region. © 2019 by the authors.