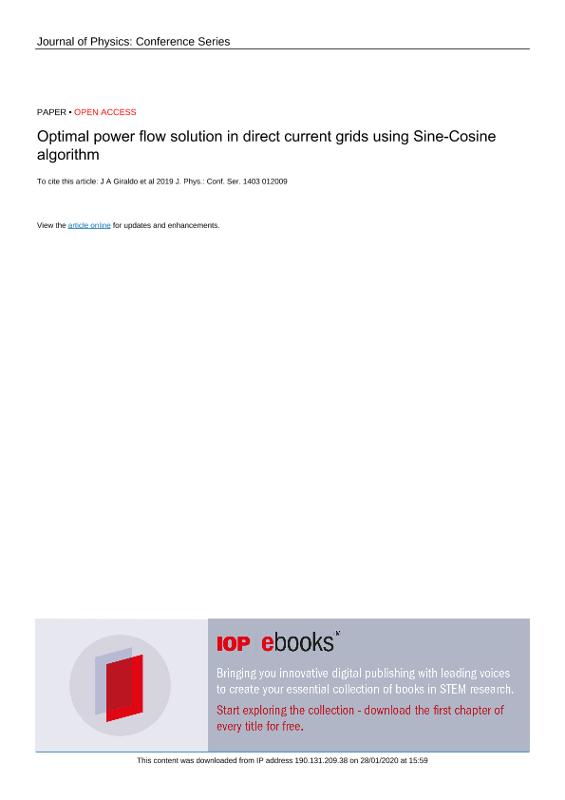 doi1010881742659614031012009.pdf (532.9Kb)
Author
Giraldo J.A.
Montoya O.D.
Grisales-Noreña L.F.
Gil-González W.
Holguín M.
University
Universidad Tecnológica de Bolívar
Metadata Show full item record
Abstract
In the next years, Colombian power system will have the connection of distributed generators and constant power loads; Therefore, it is necessary to propose the analysis methods that allow establishing the minimum requirements that have to be satisfied for the power system to guarantee an optimal power flow in order to preserve safe and reliable operation of it. For this purpose, in this paper presents an optimal power flow in direct current resistive grids with constant power loads and distributed generators. The optimal power flow problem is formulated as a master-slave optimization algorithm. The master stage covers the dispatching of all the distributed generators by using the Sine-Cosine algorithm. In the slave stage an efficient power flow method based on successive approximations is employed to determine the voltage variables and evaluate the objective function of the problem, which corresponds to the power loss minimization. A direct current distribution network composed by 21 nodes is used as test case by comparing its numerical performance with nonlinear optimization packages and two metaheuristic approaches named black-hole optimization and continuous genetic algorithm. All the simulations are conducted via MATLAB software. © Published under licence by IOP Publishing Ltd.
This work was supported in part by the Administrative Department of Science, Technology and Innovation of Colombia (Colciencias) through the national scholarship program under Grant 727-2015 and in part by the Universidad Tecnológica de Bolívar under Project C2018P020.