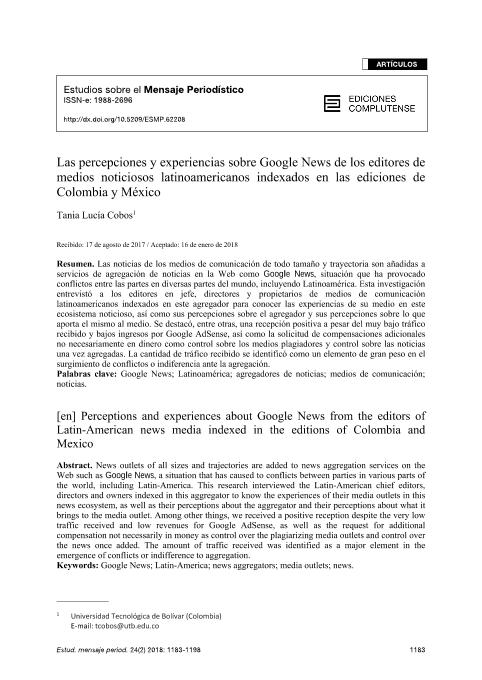 httpdxdoiorg105209ESMP62208.pdf (256.2Kb)
Author
Cobos T.L.
University
Universidad Tecnológica de Bolívar
Metadata Show full item record
Abstract
News outlets of all sizes and trajectories are added to news aggregation services on the Web such as Google News, a situation that has caused to conflicts between parties in various parts of the world, including Latin-America. This research interviewed the Latin-American chief editors, directors and owners indexed in this aggregator to know the experiences of their media outlets in this news ecosystem, as well as their perceptions about the aggregator and their perceptions about what it brings to the media outlet. Among other things, we received a positive reception despite the very low traffic received and low revenues for Google AdSense, as well as the request for additional compensation not necessarily in money as control over the plagiarizing media outlets and control over the news once added. The amount of traffic received was identified as a major element in the emergence of conflicts or indifference to aggregation. © 2018 Universidad Complutense de Madrid. All Rights Reserved.