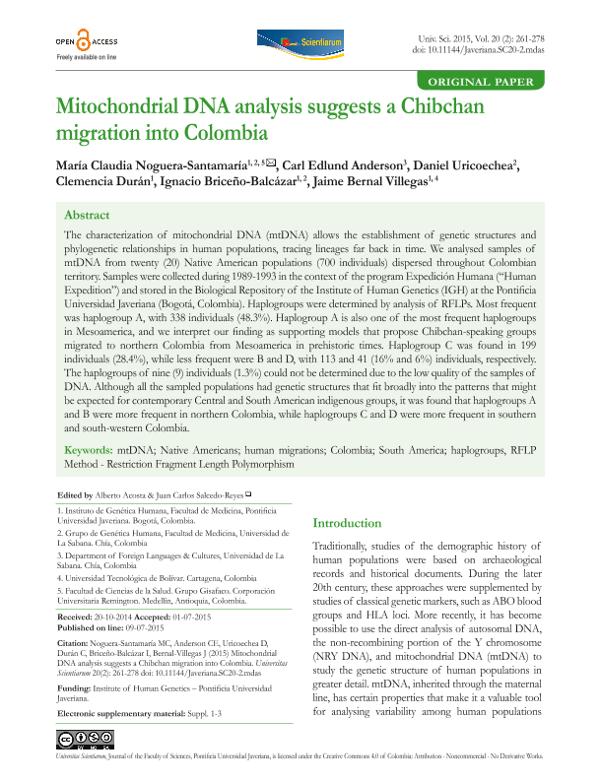 DOI10_11144Javeriana_SC20-2_mdas.pdf (828.2Kb)
Author
Noguera-Santamaría, M.C.
Anderson, C.E.
Uricoechea, D.
Durán, C.
Briceño-Balcázar, I.
Villegas, J.B.
University
Universidad Tecnológica de Bolívar
Metadata Show full item record
Abstract
The characterization of mitochondrial DNA (mtDNA) allows the establishment of genetic structures and phylogenetic relationships in human populations, tracing lineages far back in time. We analysed samples of mtDNA from twenty (20) Native American populations (700 individuals) dispersed throughout Colombian territory. Samples were collected during 1989-1993 in the context of the program Expedición Humana ("Human Expedition") and stored in the Biological Repository of the Institute of Human Genetics (IGH) at the Pontificia Universidad Javeriana (Bogotá, Colombia). Haplogroups were determined by analysis of RFLPs. Most frequent was haplogroup A, with 338 individuals (48.3%). Haplogroup A is also one of the most frequent haplogroups in Mesoamerica, and we interpret our finding as supporting models that propose Chibchan-speaking groups migrated to northern Colombia from Mesoamerica in prehistoric times. Haplogroup C was found in 199 individuals (28.4%), while less frequent were B and D, with 113 and 41 (16% and 6%) individuals, respectively. The haplogroups of nine (9) individuals (1.3%) could not be determined due to the low quality of the samples of DNA. Although all the sampled populations had genetic structures that fit broadly into the patterns that might be expected for contemporary Central and South American indigenous groups, it was found that haplogroups A and B were more frequent in northern Colombia, while haplogroups C and D were more frequent in southern and south-western Colombia.