The emergence of cognitive short-term planning: Performance of preschoolers in a problem-solving task 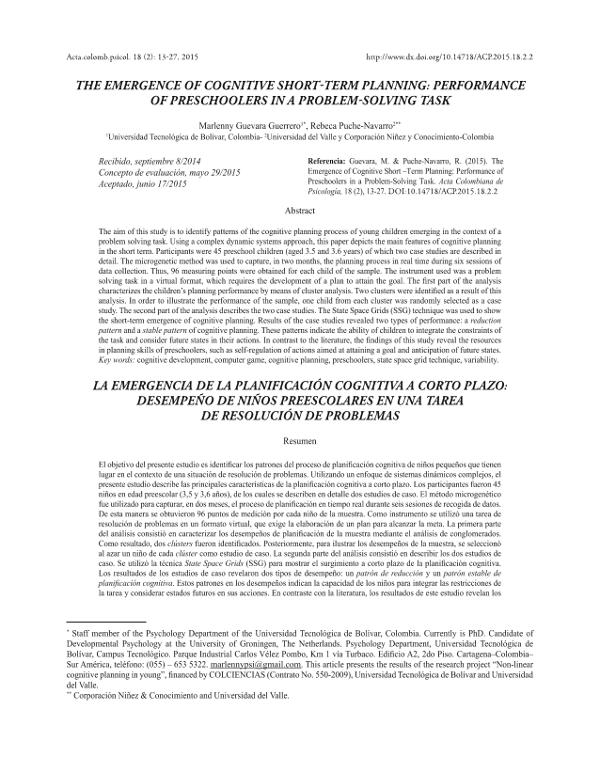 DOI10_14718ACP_2015_18_2_2.pdf (1.322Mb)
Author
Guevara Guerrero, M.
Puche-Navarro, R.
University
Universidad Tecnológica de Bolívar
Metadata Show full item record
Abstract
The aim of this study is to identify patterns of the cognitive planning process of young children emerging in the context of a problem solving task. Using a complex dynamic systems approach, this paper depicts the main features of cognitive planning in the short term. Participants were 45 preschool children (aged 3.5 and 3.6 years) of which two case studies are described in detail. The microgenetic method was used to capture, in two months, the planning process in real time during six sessions of data collection. Thus, 96 measuring points were obtained for each child of the sample. The instrument used was a problem solving task in a virtual format, which requires the development of a plan to attain the goal. The first part of the analysis characterizes the children’s planning performance by means of cluster analysis. Two clusters were identified as a result of this analysis. In order to illustrate the performance of the sample, one child from each cluster was randomly selected as a case study. The second part of the analysis describes the two case studies. The State Space Grids (SSG) technique was used to show the short-term emergence of cognitive planning. Results of the case studies revealed two types of performance: a reduction pattern and a stable pattern of cognitive planning. These patterns indicate the ability of children to integrate the constraints of the task and consider future states in their actions. In contrast to the literature, the findings of this study reveal the resources in planning skills of preschoolers, such as self-regulation of actions aimed at attaining a goal and anticipation of future states. © 2015, Universidad Catolica de Colombia. All rights reserved.