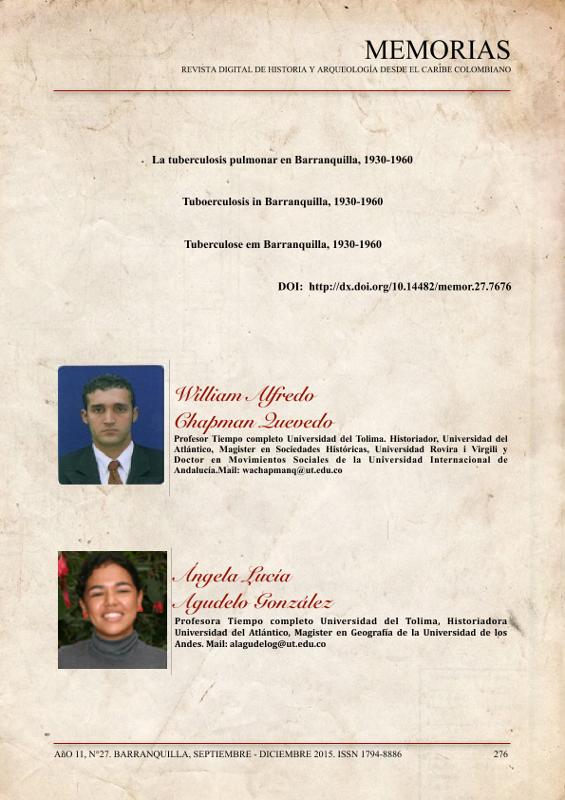 DOI10_14482memor_27_7676.pdf (1.054Mb)
Author
Zuevedo, W.A.C.
Gonzales, A.L.A.
Rambaut, I.R.M.
University
Universidad Tecnológica de Bolívar
Metadata Show full item record
Abstract
This article analyzes the role of tuberculosis in the city of Barranquilla between 1930 and 1960. It demonstrates how it became into an endemic disease due to the increment of morbidity and mortality that attract the attention of medical and local authorities who used means of communication to prevent and inform about the ways of contagion. For this research, we connect the primary sources of information (such as death certificates, hygienic reports from the Atlantic Secretary, the regional magazine of hygiene and remaining press at the Atlantic Historical Archive and the Colombian National Library) with the secondary sources (a written bibliography of tuberculosis, hygiene and global salubrious in Colombia). We conclude that tuberculosis was a disease with a high capacity to modify the lifestyle of people in Barranquilla. Local authorities found favorable places for treatment such as the dispensary and the children's hospital while they were aiming for a place for adults. These actions were insufficient to fight the disease.