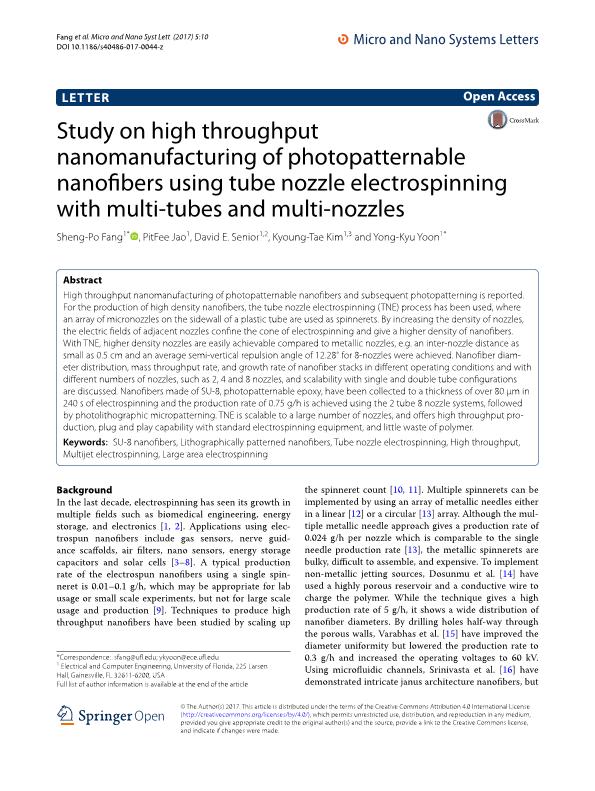 DOI10_1186s40486-017-0044-z.pdf (1.765Mb)
Author
Fang, S.P.
Jao, P.F.
Senior, D.E.
Kim, K.T.
Yoon, Y.K.
University
Universidad Tecnológica de Bolívar
Metadata Show full item record
Abstract
High throughput nanomanufacturing of photopatternable nanofibers and subsequent photopatterning is reported. For the production of high density nanofibers, the tube nozzle electrospinning (TNE) process has been used, where an array of micronozzles on the sidewall of a plastic tube are used as spinnerets. By increasing the density of nozzles, the electric fields of adjacent nozzles confine the cone of electrospinning and give a higher density of nanofibers. With TNE, higher density nozzles are easily achievable compared to metallic nozzles, e.g. an inter-nozzle distance as small as 0.5 cm and an average semi-vertical repulsion angle of 12.28° for 8-nozzles were achieved. Nanofiber diameter distribution, mass throughput rate, and growth rate of nanofiber stacks in different operating conditions and with different numbers of nozzles, such as 2, 4 and 8 nozzles, and scalability with single and double tube configurations are discussed. Nanofibers made of SU-8, photopatternable epoxy, have been collected to a thickness of over 80 μm in 240 s of electrospinning and the production rate of 0.75 g/h is achieved using the 2 tube 8 nozzle systems, followed by photolithographic micropatterning. TNE is scalable to a large number of nozzles, and offers high throughput production, plug and play capability with standard electrospinning equipment, and little waste of polymer. © 2017, The Author(s).