Effect of the non-stationarity of rainfall events on the design of hydraulic structures for runoff management and its applications to a case study at Gordo Creek watershed in Cartagena de Indias, Colombia 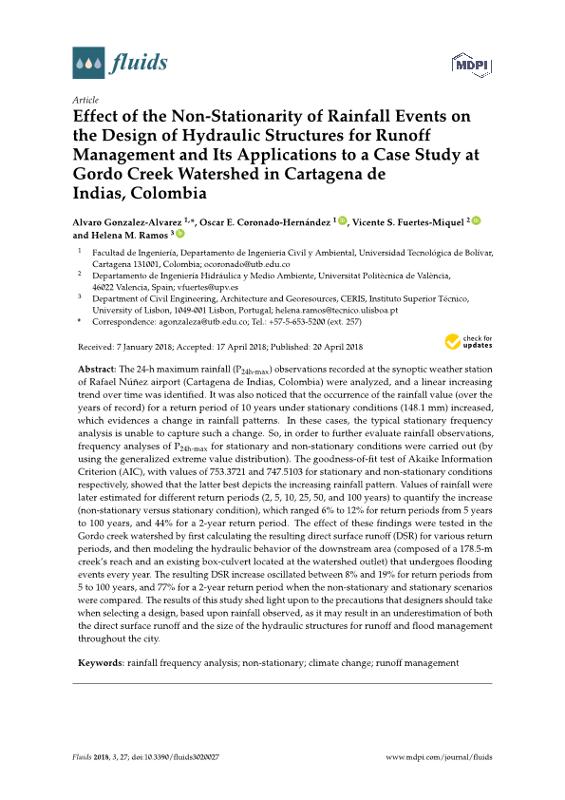 DOI10_3390fluidos3020027.pdf (13.59Mb)
Author
Gonzalez-Alvarez, A.
Coronado-Hernández, O.E.
Fuertes-Miquel, V.S.
Ramos, H.M.
University
Universidad Tecnológica de Bolívar
Metadata Show full item record
Abstract
The 24-h maximum rainfall (P 24h-max ) observations recorded at the synoptic weather station of Rafael Núñez airport (Cartagena de Indias, Colombia) were analyzed, and a linear increasing trend over time was identified. It was also noticed that the occurrence of the rainfall value (over the years of record) for a return period of 10 years under stationary conditions (148.1 mm) increased, which evidences a change in rainfall patterns. In these cases, the typical stationary frequency analysis is unable to capture such a change. So, in order to further evaluate rainfall observations, frequency analyses of P 24h-max for stationary and non-stationary conditions were carried out (by using the generalized extreme value distribution). The goodness-of-fit test of Akaike Information Criterion (AIC), with values of 753.3721 and 747.5103 for stationary and non-stationary conditions respectively, showed that the latter best depicts the increasing rainfall pattern. Values of rainfall were later estimated for different return periods (2, 5, 10, 25, 50, and 100 years) to quantify the increase (non-stationary versus stationary condition), which ranged 6% to 12% for return periods from 5 years to 100 years, and 44% for a 2-year return period. The effect of these findings were tested in the Gordo creek watershed by first calculating the resulting direct surface runoff (DSR) for various return periods, and then modeling the hydraulic behavior of the downstream area (composed of a 178.5-m creek's reach and an existing box-culvert located at the watershed outlet) that undergoes flooding events every year. The resulting DSR increase oscillated between 8% and 19% for return periods from 5 to 100 years, and 77% for a 2-year return period when the non-stationary and stationary scenarios were compared. The results of this study shed light upon to the precautions that designers should take when selecting a design, based upon rainfall observed, as it may result in an underestimation of both the direct surface runoff and the size of the hydraulic structures for runoff and flood management throughout the city. © 2018 by the authors. Licensee MDPI, Basel, Switzerland. This article is an open access article distributed under the terms and conditions of the Creative Commons Attribution (CC BY) license.