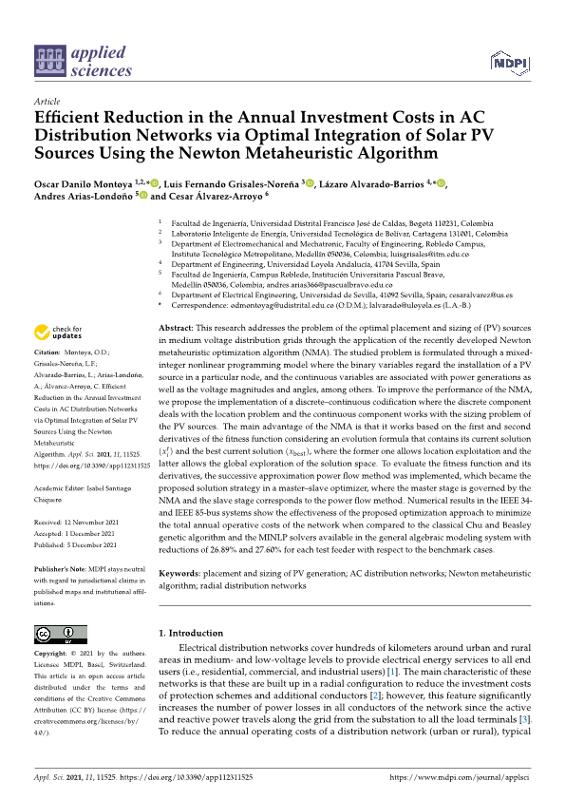 applsci-11-11525.pdf (737.6Kb)
Author
Montoya Giraldo, Oscar Danilo
Grisales-Noreña, Luis Fernando
Alvarado-Barrios, Lázaro
Arias-Londoño, Andres
Álvarez-Arroyo, Cesar
University
Universidad Tecnológica de Bolívar
Metadata Show full item record
Abstract
This research addresses the problem of the optimal placement and sizing of (PV) sources in medium voltage distribution grids through the application of the recently developed Newtonmetaheuristic optimization algorithm (NMA). The studied problem is formulated through a mixedinteger nonlinear programming model where the binary variables regard the installation of a PV source in a particular node, and the continuous variables are associated with power generations as well as the voltage magnitudes and angles, among others. To improve the performance of the NMA, we propose the implementation of a discrete–continuous codification where the discrete component deals with the location problem and the continuous component works with the sizing problem of the PV sources. The main advantage of the NMA is that it works based on the first and second derivatives of the fitness function considering an evolution formula that contains its current solution (x t i ) and the best current solution (xbest), where the former one allows location exploitation and the latter allows the global exploration of the solution space. To evaluate the fitness function and its derivatives, the successive approximation power flow method was implemented, which became the proposed solution strategy in a master–slave optimizer, where the master stage is governed by the NMA and the slave stage corresponds to the power flow method. Numerical results in the IEEE 34- and IEEE 85-bus systems show the effectiveness of the proposed optimization approach to minimize the total annual operative costs of the network when compared to the classical Chu and Beasley genetic algorithm and the MINLP solvers available in the general algebraic modeling system with reductions of 26.89% and 27.60% for each test feeder with respect to the benchmark cases.