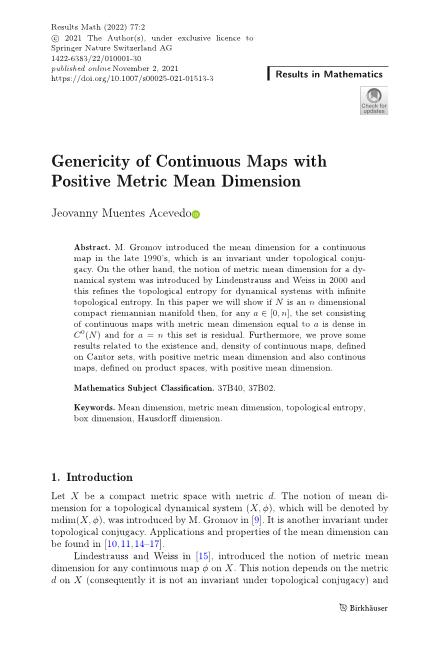 Acevedo2021_Article_GenericityOfContinuousMapsWith.pdf (861.0Kb)
Author
Muentes Acevedo, Jeovanny
University
Universidad Tecnológica de Bolívar
City
Colombia
Metadata Show full item record
Abstract
M. Gromov introduced the mean dimension for a continuous map in the late 1990’s, which is an invariant under topological conjugacy. On the other hand, the notion of metric mean dimension for a dynamical system was introduced by Lindenstrauss and Weiss in 2000 and this refines the topological entropy for dynamical systems with infinite topological entropy. In this paper we will show if N is an n dimensional compact riemannian manifold then, for any a ∈ [0, n], the set consisting of continuous maps with metric mean dimension equal to a is dense in C0(N) and for a = n this set is residual. Furthermore, we prove some results related to the existence and, density of continuous maps, defined on Cantor sets, with positive metric mean dimension and also continous maps, defined on product spaces, with positive mean dimension.