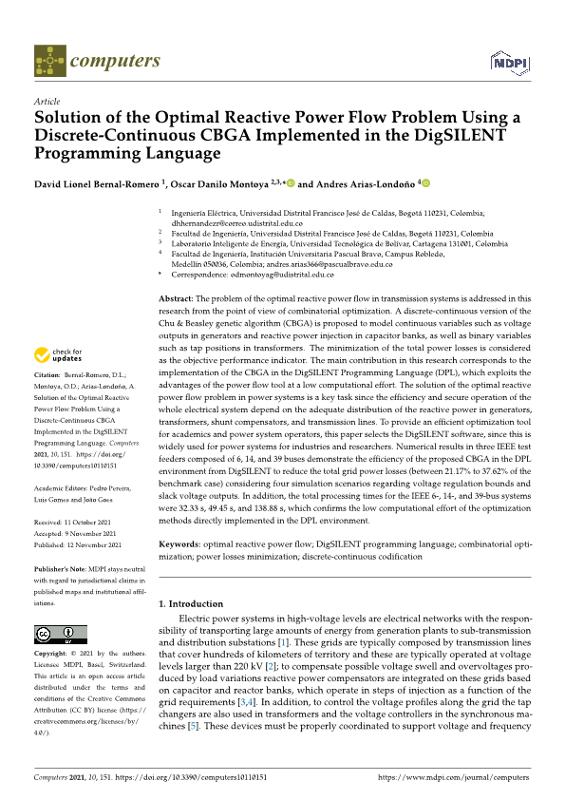 The problem of the optimal reactive power flow in transmission systems is addressed in this research from the point of view of combinatorial optimization. A discrete-continuous version of the Chu & Beasley genetic algorithm (CBGA) is proposed to model continuous variables such as voltage outputs in generators and reactive power injection in capacitor banks, as well as binary variables such as tap positions in transformers. The minimization of the total power losses is considered as the objective performance indicator. The main contribution in this research corresponds to the implementation of the CBGA in the DigSILENT Programming Language (DPL), which exploits the advantages of the power flow tool at a low computational effort. The solution of the optimal reactive power flow problem in power systems is a key task since the efficiency and secure operation of the whole electrical system depend on the adequate distribution of the reactive power in generators, transformers, shunt compensators, and transmission lines. To provide an efficient optimization tool for academics and power system operators, this paper selects the DigSILENT software, since this is widely used for power systems for industries and researchers. Numerical results in three IEEE test feeders composed of 6, 14, and 39 buses demonstrate the efficiency of the proposed CBGA in the DPL environment from DigSILENT to reduce the total grid power losses (between 21.17% to 37.62% of the benchmark case) considering four simulation scenarios regarding voltage regulation bounds and slack voltage outputs. In addition, the total processing times for the IEEE 6-, 14-, and 39-bus systems were 32.33 s, 49.45 s, and 138.88 s, which confirms the low computational effort of the optimization methods directly implemented in the DPL environment