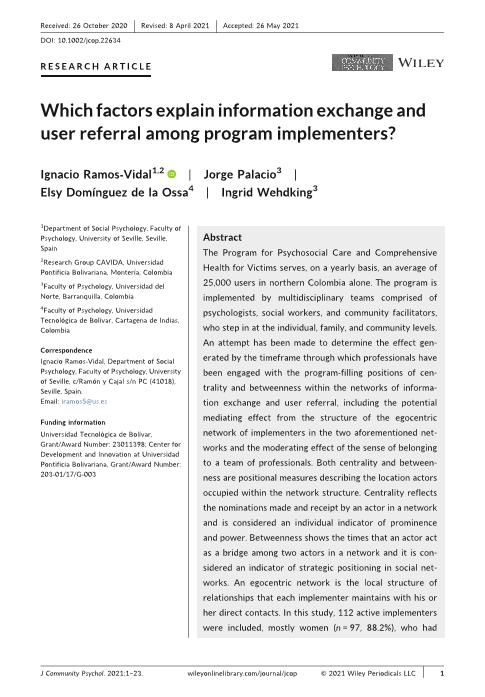 Ramos-Vidal_et_al_jcop.22634_Elsy Mercedes Doming.pdf (1.032Mb)
Author
Ramos‐Vidal, Ignacio
Palacio, Jorge
Domínguez de la Ossa, Elsy
Wehdking, Ingrid
University
Universidad Tecnológica de Bolívar
Metadata Show full item record
Abstract
The Program for Psychosocial Care and Comprehensive Health for Victims serves, on a yearly basis, an average of 25,000 users in northern Colombia alone. The program is implemented by multidisciplinary teams comprised of psychologists, social workers, and community facilitators, who step in at the individual, family, and community levels. An attempt has been made to determine the effect generated by the timeframe through which professionals have been engaged with the program‐filling positions of centrality and betweenness within the networks of information exchange and user referral, including the potential mediating effect from the structure of the egocentric network of implementers in the two aforementioned networks and the moderating effect of the sense of belonging to a team of professionals. Both centrality and betweenness are positional measures describing the location actors occupied within the network structure. Centrality reflects the nominations made and receipt by an actor in a network and is considered an individual indicator of prominence and power. Betweenness shows the times that an actor act as a bridge among two actors in a network and it is considered an indicator of strategic positioning in social networks. An egocentric network is the local structure of relationships that each implementer maintains with his or her direct contacts. In this study, 112 active implementers were included, mostly women (n = 97, 88.2%), who had been working on the program for 16.9 months on average (SD = 14.7). Through conditional process analysis, it has been shown that the time that the implementers have been working on the program and the sense of belonging to the task team are relevant factors that interact with each other toward explaining the level of centrality and betweenness of professionals in the information exchange and user referral networks