Girls Do Not Sweat: the Development of Gender Stereotypes in Physical Education in Primary School 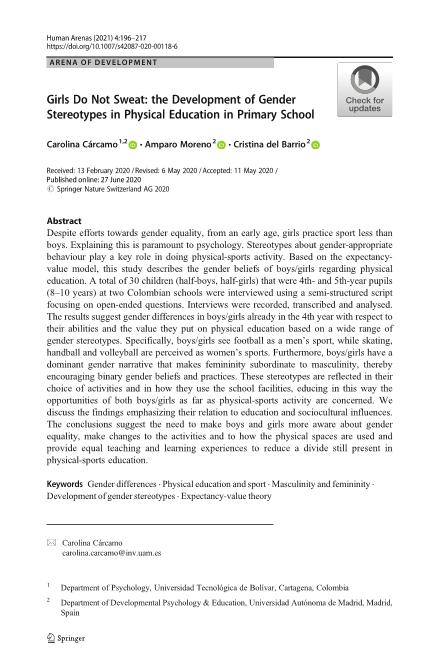 Cárcamo2021_Article_GirlsDoNotSweatTheDevelopmentO.pdf (498.6Kb)
Author
Cárcamo, Carolina
Moreno, Amparo
Del Barrio, Cristina
University
Universidad Tecnológica de Bolívar
Metadata Show full item record
Abstract
Despite efforts towards gender equality, from an early age, girls practice sport less than boys. Explaining this is paramount to psychology. Stereotypes about gender-appropriate behaviour play a key role in doing physical-sports activity. Based on the expectancyvalue model, this study describes the gender beliefs of boys/girls regarding physical education. A total of 30 children (half-boys, half-girls) that were 4th- and 5th-year pupils (8–10 years) at two Colombian schools were interviewed using a semi-structured script focusing on open-ended questions. Interviews were recorded, transcribed and analysed. The results suggest gender differences in boys/girls already in the 4th year with respect to their abilities and the value they put on physical education based on a wide range of gender stereotypes. Specifically, boys/girls see football as a men’s sport, while skating, handball and volleyball are perceived as women’s sports. Furthermore, boys/girls have a dominant gender narrative that makes femininity subordinate to masculinity, thereby encouraging binary gender beliefs and practices. These stereotypes are reflected in their choice of activities and in how they use the school facilities, educing in this way the opportunities of both boys/girls as far as physical-sports activity are concerned. We discuss the findings emphasizing their relation to education and sociocultural influences. The conclusions suggest the need to make boys and girls more aware about gender equality, make changes to the activities and to how the physical spaces are used and provide equal teaching and learning experiences to reduce a divide still present in physical-sports education.