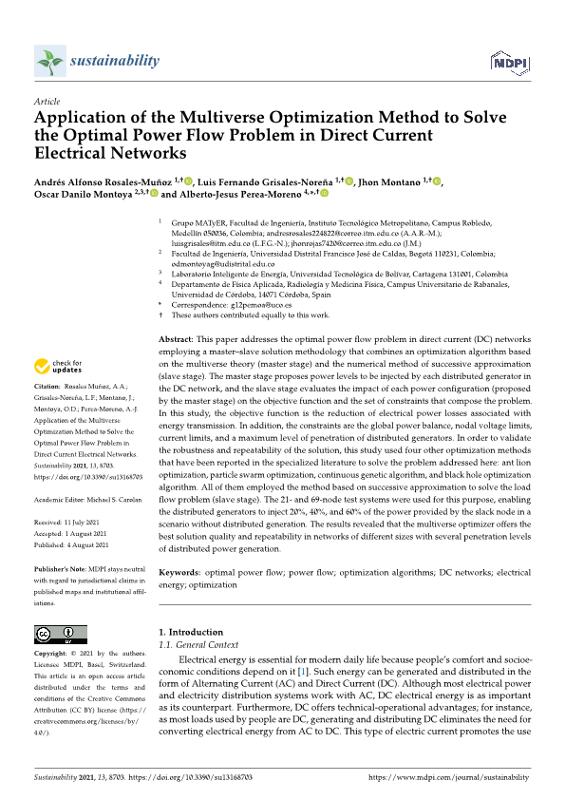 [Art. 34] Application of the Multiverse Optim_Oscar Danilo Montoya.pdf (1.075Mb)
Author
Rosales-Muñoz, Andrés Alfonso
Grisales-Noreña, Luis Fernando
Montano, Jhon
Montoya, Oscar Danilo
Perea-Moreno, Alberto-Jesus
University
Universidad Tecnológica de Bolívar
Metadata Show full item record
Abstract
This paper addresses the optimal power flow problem in direct current (DC) networks employing a master–slave solution methodology that combines an optimization algorithm based on the multiverse theory (master stage) and the numerical method of successive approximation (slave stage). The master stage proposes power levels to be injected by each distributed generator in the DC network, and the slave stage evaluates the impact of each power configuration (proposed by the master stage) on the objective function and the set of constraints that compose the problem. In this study, the objective function is the reduction of electrical power losses associated with energy transmission. In addition, the constraints are the global power balance, nodal voltage limits, current limits, and a maximum level of penetration of distributed generators. In order to validate the robustness and repeatability of the solution, this study used four other optimization methods that have been reported in the specialized literature to solve the problem addressed here: ant lion optimization, particle swarm optimization, continuous genetic algorithm, and black hole optimization algorithm. All of them employed the method based on successive approximation to solve the load flow problem (slave stage). The 21- and 69-node test systems were used for this purpose, enabling the distributed generators to inject 20%, 40%, and 60% of the power provided by the slack node in a scenario without distributed generation. The results revealed that the multiverse optimizer offers the best solution quality and repeatability in networks of different sizes with several penetration levels of distributed power generation