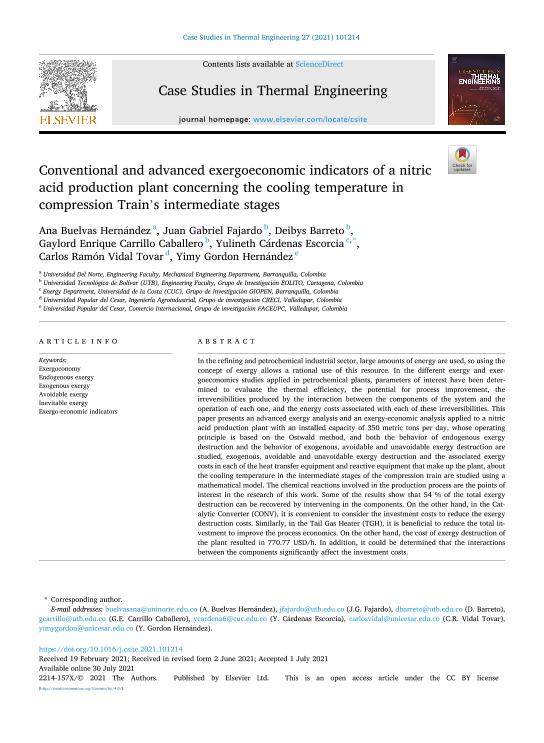 Conventional and advanced exergoeconomic indicators of a nitric.pdf (4.683Mb)
Author
Buelvas Hernandez, Ana
Fajardo, Juan Gabriel
Barreto, Deibys
Carrillo Caballero, Gaylord Enrique
Cardenas Escorcia, Yulineth
Vidal Tovar, Carlos Ramón
Hernández, Yimy Gordon
University
Universidad Tecnológica de Bolívar
Metadata Show full item record
Abstract
In the refining and petrochemical industrial sector, large amounts of energy are used, so using the concept of exergy allows a rational use of this resource. In the different exergy and exergoeconomics studies applied in petrochemical plants, parameters of interest have been determined to evaluate the thermal efficiency, the potential for process improvement, the irreversibilities produced by the interaction between the components of the system and the operation of each one, and the energy costs associated with each of these irreversibilities. This paper presents an advanced exergy analysis and an exergy-economic analysis applied to a nitric acid production plant with an installed capacity of 350 metric tons per day, whose operating principle is based on the Ostwald method, and both the behavior of endogenous exergy destruction and the behavior of exogenous, avoidable and unavoidable exergy destruction are studied, exogenous, avoidable and unavoidable exergy destruction and the associated exergy costs in each of the heat transfer equipment and reactive equipment that make up the plant, about the cooling temperature in the intermediate stages of the compression train are studied using a mathematical model. The chemical reactions involved in the production process are the points of interest in the research of this work. Some of the results show that 54 % of the total exergy destruction can be recovered by intervening in the components. On the other hand, in the Catalytic Converter (CONV), it is convenient to consider the investment costs to reduce the exergy destruction costs. Similarly, in the Tail Gas Heater (TGH), it is beneficial to reduce the total investment to improve the process economics. On the other hand, the cost of exergy destruction of the plant resulted in 770.77 USD/h. In addition, it could be determined that the interactions between the components significantly affect the investment costs