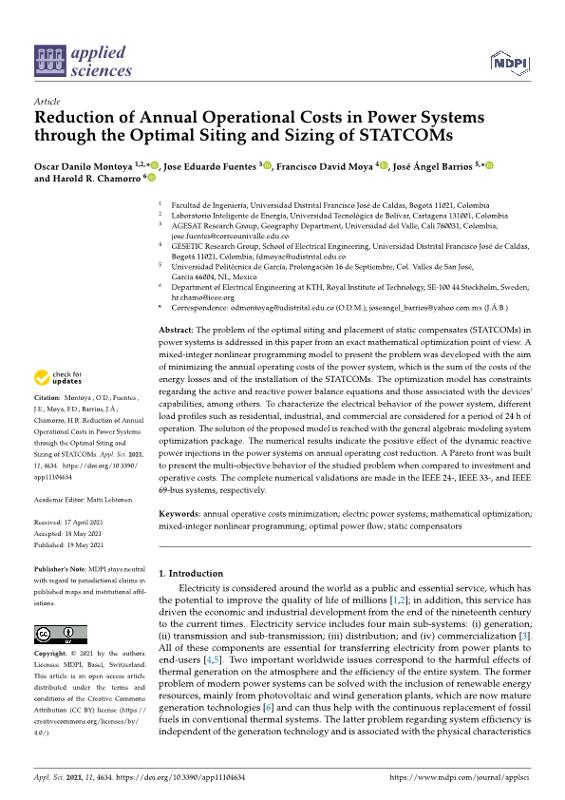 [Art. 24] Reduction of Annual Operational Cos_Oscar Danilo Montoya.pdf (304.5Kb)
Author
Montoya, Oscar Danilo
Fuentes, Jose Eduardo
Moya, Francisco David
Barrios, Jose Angel
Chamorro, Harold R.
University
Universidad Tecnológica de Bolívar
Metadata Show full item record
Abstract
The problem of the optimal siting and placement of static compensates (STATCOMs) in power systems is addressed in this paper from an exact mathematical optimization point of view. A mixed-integer nonlinear programming model to present the problem was developed with the aim of minimizing the annual operating costs of the power system, which is the sum of the costs of the energy losses and of the installation of the STATCOMs. The optimization model has constraints regarding the active and reactive power balance equations and those associated with the devices’ capabilities, among others. To characterize the electrical behavior of the power system, different load profiles such as residential, industrial, and commercial are considered for a period of 24 h of operation. The solution of the proposed model is reached with the general algebraic modeling system optimization package. The numerical results indicate the positive effect of the dynamic reactive power injections in the power systems on annual operating cost reduction. A Pareto front was built to present the multi-objective behavior of the studied problem when compared to investment and operative costs. The complete numerical validations are made in the IEEE 24-, IEEE 33-, and IEEE 69-bus systems, respectively.