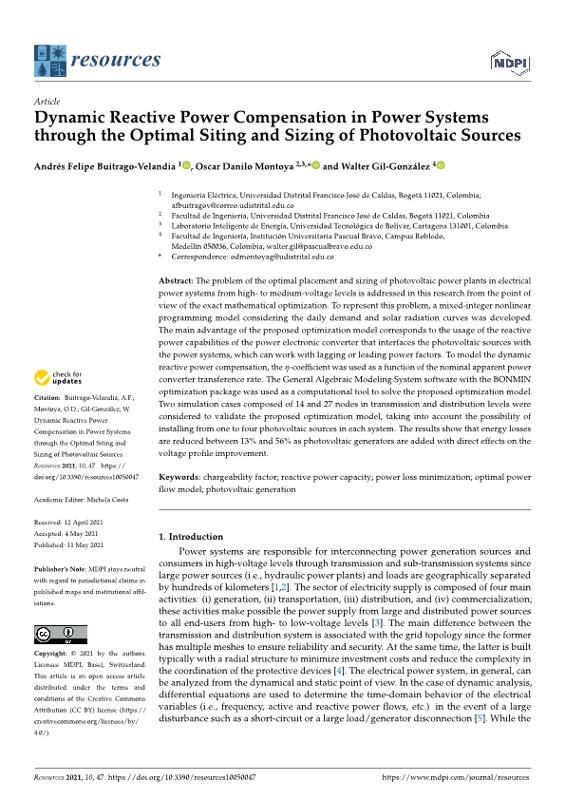 Artículo (448.9Kb)
Author
Buitrago-Velandia, Andrés Felipe
Montoya, Oscar Danilo
Gil-González, Walter
University
Universidad Tecnológica de Bolívar
Metadata Show full item record
Abstract
The problem of the optimal placement and sizing of photovoltaic power plants in electrical power systems from high- to medium-voltage levels is addressed in this research from the point of view of the exact mathematical optimization. To represent this problem, a mixed-integer nonlinear programming model considering the daily demand and solar radiation curves was developed. The main advantage of the proposed optimization model corresponds to the usage of the reactive power capabilities of the power electronic converter that interfaces the photovoltaic sources with the power systems, which can work with lagging or leading power factors. To model the dynamic reactive power compensation, the η-coefficient was used as a function of the nominal apparent power converter transference rate. The General Algebraic Modeling System software with the BONMIN optimization package was used as a computational tool to solve the proposed optimization model. Two simulation cases composed of 14 and 27 nodes in transmission and distribution levels were considered to validate the proposed optimization model, taking into account the possibility of installing from one to four photovoltaic sources in each system. The results show that energy losses are reduced between 13% and 56% as photovoltaic generators are added with direct effects on the voltage profile improvement