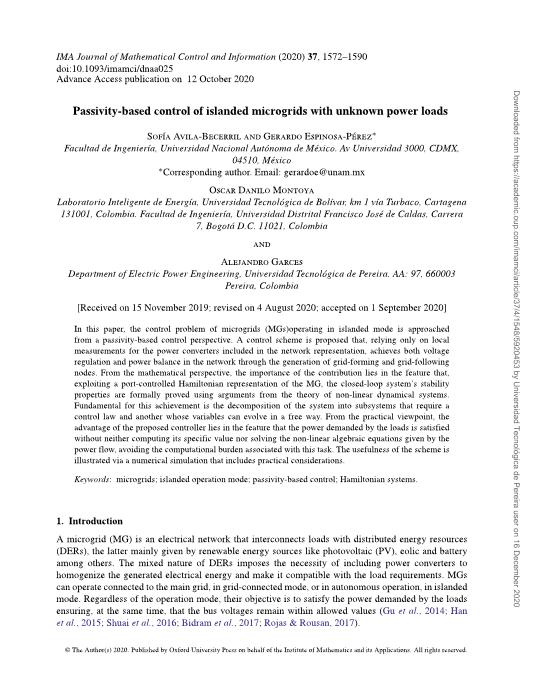 Artículo (625.8Kb)
Author
Avila Becerril, Sofia
Espinosa Pérez, Gerardo
Montoya, Oscar Danilo
Garces, Alejandro
University
Universidad Tecnológica de Bolívar
Metadata Show full item record
Abstract
In this paper, the control problem of microgrids (MGs)operating in islanded mode is approached from a passivity-based control perspective. A control scheme is proposed that, relying only on local measurements for the power converters included in the network representation, achieves both voltage regulation and power balance in the network through the generation of grid-forming and grid-following nodes. From the mathematical perspective, the importance of the contribution lies in the feature that, exploiting a port-controlled Hamiltonian representation of the MG, the closed-loop system’s stability properties are formally proved using arguments from the theory of non-linear dynamical systems. Fundamental for this achievement is the decomposition of the system into subsystems that require a control law and another whose variables can evolve in a free way. From the practical viewpoint, the advantage of the proposed controller lies in the feature that the power demanded by the loads is satisfied without neither computing its specific value nor solving the non-linear algebraic equations given by the power flow, avoiding the computational burden associated with this task. The usefulness of the scheme is illustrated via a numerical simulation that includes practical considerations.