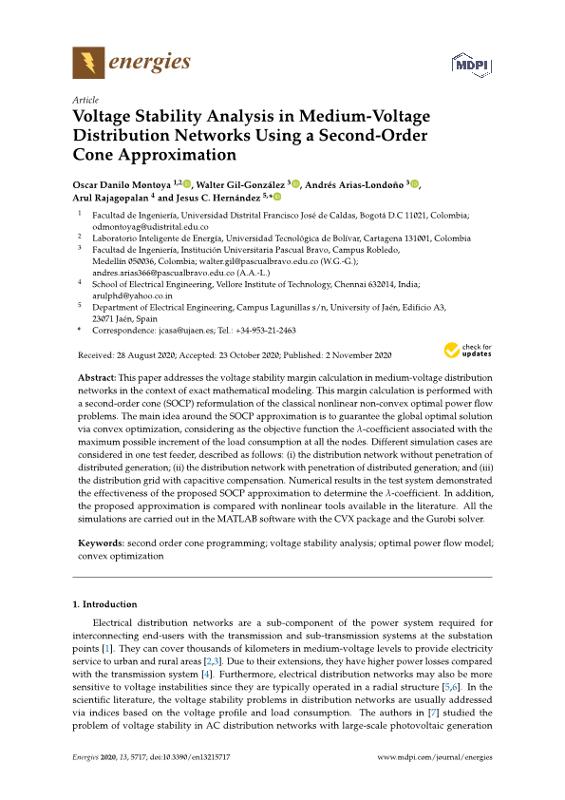 Artículo principal (341.5Kb)
Author
Montoya, Oscar Danilo
Gil-González, Walter
Arias-Londoño, Andrés
Rajagopalan, Arul
Hernández, Jesus C.
University
Universidad Tecnológica de Bolívar
Metadata Show full item record
Abstract
This paper addresses the voltage stability margin calculation in medium-voltage distribution networks in the context of exact mathematical modeling. This margin calculation is performed with a second-order cone (SOCP) reformulation of the classical nonlinear non-convex optimal power flow problems. The main idea around the SOCP approximation is to guarantee the global optimal solution via convex optimization, considering as the objective function the λ-coefficient associated with the maximum possible increment of the load consumption at all the nodes. Different simulation cases are considered in one test feeder, described as follows: (i) the distribution network without penetration of distributed generation; (ii) the distribution network with penetration of distributed generation; and (iii) the distribution grid with capacitive compensation. Numerical results in the test system demonstrated the effectiveness of the proposed SOCP approximation to determine the λ-coefficient. In addition, the proposed approximation is compared with nonlinear tools available in the literature. All the simulations are carried out in the MATLAB software with the CVX package and the Gurobi solver.