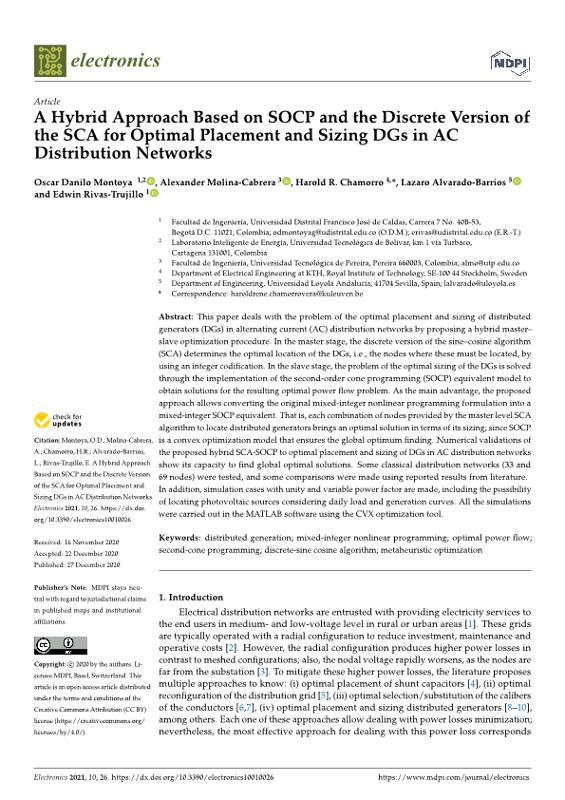 Artículo principal (382.2Kb)
Author
Montoya, Oscar Danilo
Molina-Cabrera, Alexander
Chamorro, Harold R.
Alvarado-Barrios, Lazaro
Rivas-Trujillo, Edwin
University
Universidad Tecnológica de Bolívar
Metadata Show full item record
Abstract
This paper deals with the problem of the optimal placement and sizing of distributed generators (DGs) in alternating current (AC) distribution networks by proposing a hybrid master–slave optimization procedure. In the master stage, the discrete version of the sine–cosine algorithm (SCA) determines the optimal location of the DGs, i.e., the nodes where these must be located, by using an integer codification. In the slave stage, the problem of the optimal sizing of the DGs is solved through the implementation of the second-order cone programming (SOCP) equivalent model to obtain solutions for the resulting optimal power flow problem. As the main advantage, the proposed approach allows converting the original mixed-integer nonlinear programming formulation into a mixed-integer SOCP equivalent. That is, each combination of nodes provided by the master level SCA algorithm to locate distributed generators brings an optimal solution in terms of its sizing; since SOCP is a convex optimization model that ensures the global optimum finding. Numerical validations of the proposed hybrid SCA-SOCP to optimal placement and sizing of DGs in AC distribution networks show its capacity to find global optimal solutions. Some classical distribution networks (33 and 69 nodes) were tested, and some comparisons were made using reported results from literature. In addition, simulation cases with unity and variable power factor are made, including the possibility of locating photovoltaic sources considering daily load and generation curves. All the simulations were carried out in the MATLAB software using the CVX optimization tool.