Understanding the youth of Colombia : from the socioeconomic determinants of college enrollment to the design of students loans 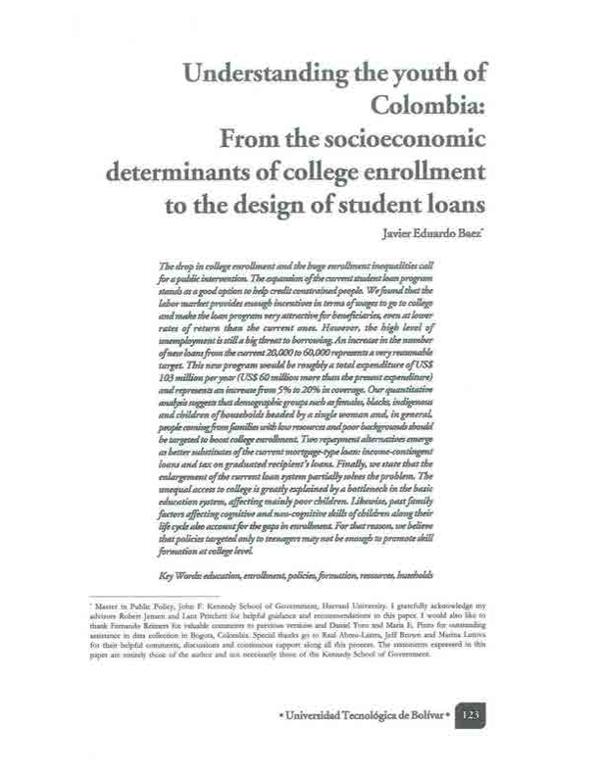 0089.pdf (1.461Mb)
Author
Báez, Javier Eduardo
University
Universidad Tecnológica de Bolívar
Metadata Show full item record
Abstract
The drop in college enrollment and the huge enrollment inequalities call for a public intervention. The expansion of the current student loan program stands as a good option to help credit constrained people. We found that the labor market provides enough incentives in terms of wages to go to college and make the loan program very attractive for beneficiaries, even at lower rates of return than the current ones. However the high level of unemployment is still a big threat to borrowing. An increase in the numbers of new loans from the current 20,000 to 60,000 represents a very reasonable target. This new program would be roughly a total expenditure og US{dollar}103 million per year (US{dollar} 60 million more than the present expenditure) and represents an increase from 5% to 20% in coverage. Our quantitative analysis suggest that demographic groups such as females, black, indigenous and children of households headed by a single woman and, in general, people coming from families with low resourses and poor backgrounds should be targeted to bust college enrollment. Two repayment alternative emerge as better substitutes substitutes of the current mortgage-type loan: income-contingent loans and tax on graduate recipient's loans. Finally we state that the enlargement of the current loan system partially solves the problem. The unequal access to college ins greatly explained by a bottleneck in the basic education system, affecting mainly poor children. Likewise, past family pactors affecting cognitive and non-cognitive skills of children along their life cycle also account for the gaps in enrollment. For that reason, we believe that policies targeted only to teenagers may not be enough to promote skill formation at college level.
gráficos, tablas.
Incluye referencias bibliográficas (páginas 169-171).