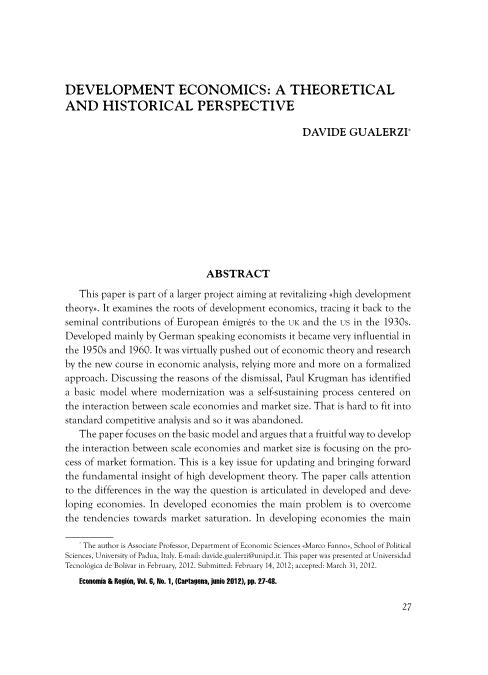 This paper is part of a larger project aiming at revitalizing «high development theory». It examines the roots of development economics, tracing it back to the seminal contributions of European émigrés to the UK and the US in the 1930s. Developed mainly by German speaking economists it became very influential in the 1950s and 1960. It was virtually pushed out of economic theory and research by the new course in economic analysis, relying more and more on a formalized approach. Discussing the reasons of the dismissal, Paul Krugman has identified a basic model where modernization was a self-sustaining process centered on the interaction between scale economies and market size. That is hard to fit into standard competitive analysis and so it was abandoned. The paper focuses on the basic model and argues that a fruitful way to develop the interaction between scale economies and market size is focusing on the process of market formation. This is a key issue for updating and bringing forward the fundamental insight of high development theory. The paper calls attention to the differences in the way the question is articulated in developed and developing economies. In developed economies the main problem is to overcome the tendencies towards market saturation In developing economies the main problem is to build up the domestic market. Constraints arise from income distribution, social conflicts and environmental problems. We argue that the focus on market formation helps to shape a research agenda that, while based on the approach of high development theory, can address the formidable challenges posed by the development of a heterogeneous periphery dominated by the newgiants in Asia and Latin America.