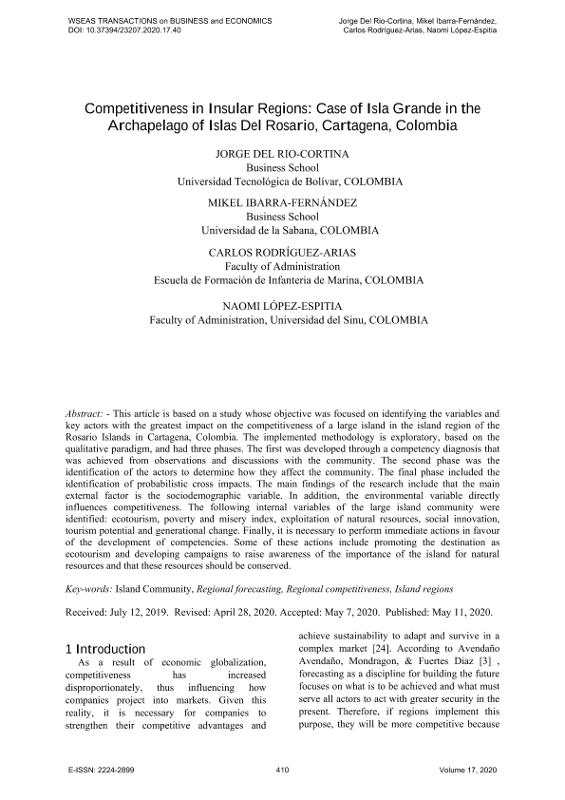 6.pdf (1.485Mb)
Author
Del Rio-Cortina, Jorge
Ibarra-Fernández, Mikel
Rodríguez-Arias, Carlos
López-Espitia, Noami
University
Universidad Tecnológica de Bolívar
City
Cartagena de Indias
Metadata Show full item record
Abstract
This article is based on a study whose objective was focused on identifying the variables and key actors with the greatest impact on the competitiveness of a large island in the island region of the Rosario Islands in Cartagena, Colombia. The implemented methodology is exploratory, based on the qualitative paradigm, and had three phases. The first was developed through a competency diagnosis that was achieved from observations and discussions with the community. The second phase was the identification of the actors to determine how they affect the community. The final phase included the identification of probabilistic cross impacts. The main findings of the research include that the main external factor is the sociodemographic variable. In addition, the environmental variable directly influences competitiveness. The following internal variables of the large island community were identified: ecotourism, poverty and misery index, exploitation of natural resources, social innovation, tourism potential and generational change. Finally, it is necessary to perform immediate actions in favour of the development of competencies. Some of these actions include promoting the destination as ecotourism and developing campaigns to raise awareness of the importance of the island for natural resources and that these resources should be conserved.