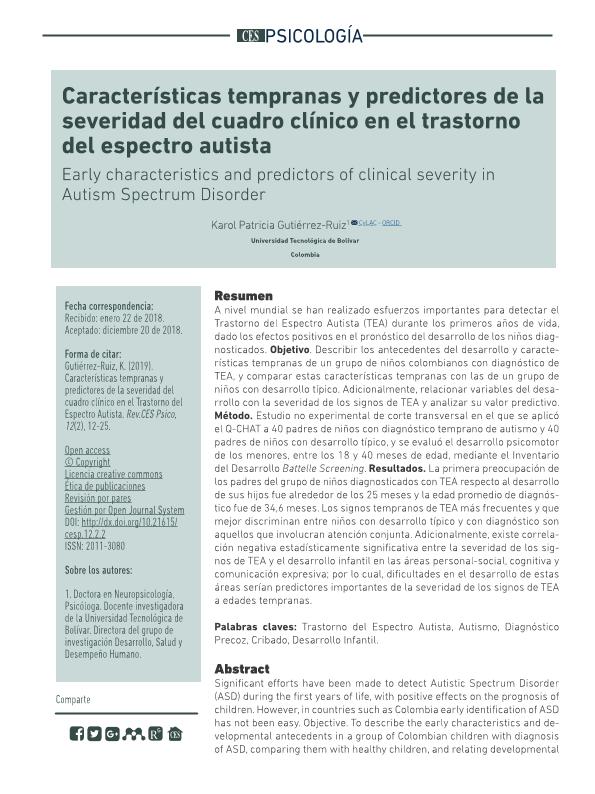 DOIhttpdxdoiorg1021615.pdf (330.7Kb)
Author
Gutiérrez-Ruiz K.P.
University
Universidad Tecnológica de Bolívar
Metadata Show full item record
Abstract
Significant efforts have been made to detect Autistic Spectrum Disorder (ASD) during the first years of life, with positive effects on the prognosis of children. However, in countries such as Colombia early identification of ASD has not been easy. Objective. To describe the early characteristics and developmental antecedents in a group of Colombian children with diagnosis of ASD, comparing them with healthy children, and relating developmental variables to the severity of ASD signs by estimating their predictive value. Method. A cross-sectional study was carried out using a non-experimental design. The Q-CHAT was administered to 40 parents of children with early diagnosis of autism and 40 parents of children with typical development between 18 and 40 months. The psy-chomotor development was explored through the Battelle Screening Development Inventory. Results. The first concern of parents for their children development of was around 25 months old and the average age of diagnosis was 34.6 months. The most frequent early signs of ASD and that are better discriminated between children with typical development and those diagnosed with ASD are the ones that involve joint attention. Additionally, there is a strong negative correlation between the severity of ASD signs and child development in the personal-social, cognitive and expressive communication areas; these would be important predictors of the severity of the signs of ASD at early age. © Licencia creative commons Ética de publicaciones Revisión por pares Gestión por Open Journal System