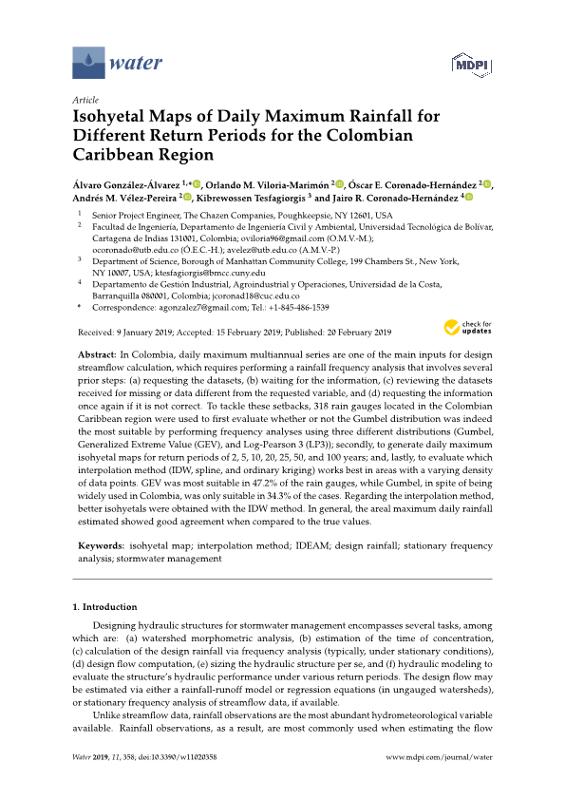 DOI10_3390w11020358.pdf (7.760Mb)
Autor(es)
González-álvarez, A.
Viloria-Marimón, O.M.
Coronado-Hernández, O.E.
Vélez-Pereira, A.M.
Tesfagiorgis, K.
Coronado-Hernández, J.R.
Universidad
Universidad Tecnológica de Bolívar
Metadatos Mostrar el registro completo del ítem
Resumen
In Colombia, daily maximum multiannual series are one of the main inputs for design streamflow calculation, which requires performing a rainfall frequency analysis that involves several prior steps: (a) requesting the datasets, (b) waiting for the information, (c) reviewing the datasets received for missing or data different from the requested variable, and (d) requesting the information once again if it is not correct. To tackle these setbacks, 318 rain gauges located in the Colombian Caribbean region were used to first evaluate whether or not the Gumbel distribution was indeed the most suitable by performing frequency analyses using three different distributions (Gumbel, Generalized Extreme Value (GEV), and Log-Pearson 3 (LP3)); secondly, to generate daily maximum isohyetal maps for return periods of 2, 5, 10, 20, 25, 50, and 100 years; and, lastly, to evaluate which interpolation method (IDW, spline, and ordinary kriging) works best in areas with a varying density of data points. GEV was most suitable in 47.2% of the rain gauges, while Gumbel, in spite of being widely used in Colombia, was only suitable in 34.3% of the cases. Regarding the interpolation method, better isohyetals were obtained with the IDW method. In general, the areal maximum daily rainfall estimated showed good agreement when compared to the true values. © 2019 by the authors.