Economic shocks and their efect on the schooling and labor participation of youth: evidence from the metal mining price boom in Chilean counties 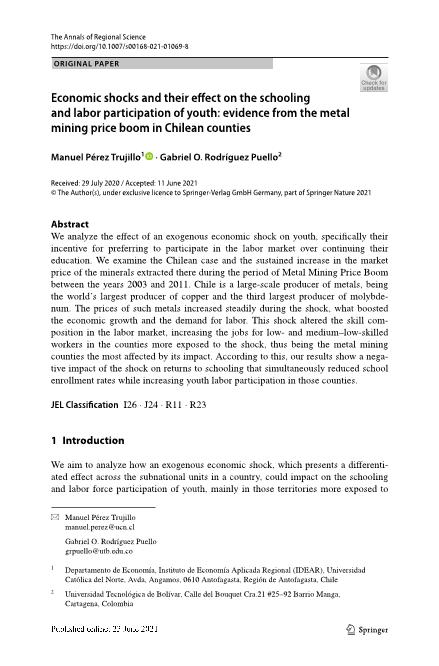 We analyze the efect of an exogenous economic shock on youth, specifcally their incentive for preferring to participate in the labor market over continuing their education. We examine the Chilean case and the sustained increase in the market price of the minerals extracted there during the period of Metal Mining Price Boom between the years 2003 and 2011. Chile is a large-scale producer of metals, being the world’s largest producer of copper and the third largest producer of molybdenum. The prices of such metals increased steadily during the shock, what boosted the economic growth and the demand for labor. This shock altered the skill composition in the labor market, increasing the jobs for low- and medium–low-skilled workers in the counties more exposed to the shock, thus being the metal mining counties the most afected by its impact. According to this, our results show a negative impact of the shock on returns to schooling that simultaneously reduced school enrollment rates while increasing youth labor participation in those counties