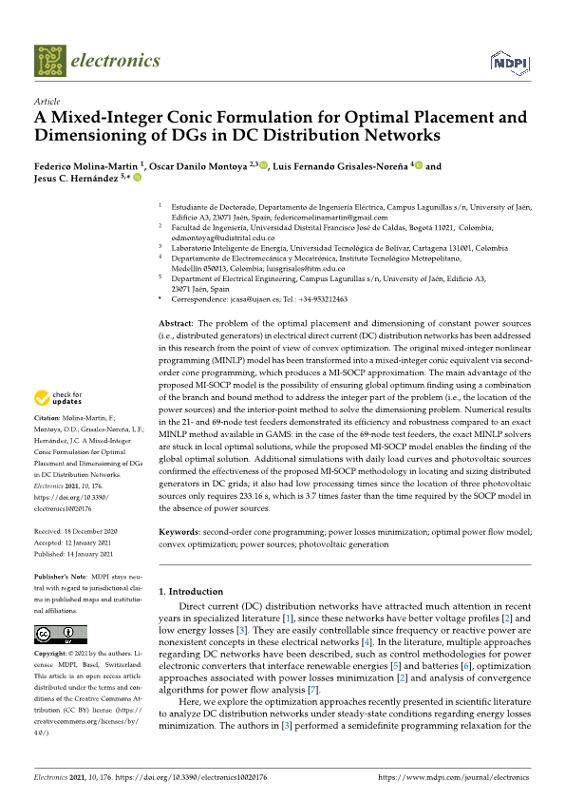 Artículo principal (343.0Kb)
Author
Molina-Martin, Federico
Montoya, Oscar Danilo
Grisales-Noreña, Luis Fernando
Hernández, Jesus C.
University
Universidad Tecnológica de Bolívar
Metadata Show full item record
Abstract
The problem of the optimal placement and dimensioning of constant power sources (i.e., distributed generators) in electrical direct current (DC) distribution networks has been addressed in this research from the point of view of convex optimization. The original mixed-integer nonlinear programming (MINLP) model has been transformed into a mixed-integer conic equivalent via second-order cone programming, which produces a MI-SOCP approximation. The main advantage of the proposed MI-SOCP model is the possibility of ensuring global optimum finding using a combination of the branch and bound method to address the integer part of the problem (i.e., the location of the power sources) and the interior-point method to solve the dimensioning problem. Numerical results in the 21- and 69-node test feeders demonstrated its efficiency and robustness compared to an exact MINLP method available in GAMS: in the case of the 69-node test feeders, the exact MINLP solvers are stuck in local optimal solutions, while the proposed MI-SOCP model enables the finding of the global optimal solution. Additional simulations with daily load curves and photovoltaic sources confirmed the effectiveness of the proposed MI-SOCP methodology in locating and sizing distributed generators in DC grids; it also had low processing times since the location of three photovoltaic sources only requires 233.16s, which is 3.7 times faster than the time required by the SOCP model in the absence of power sources.